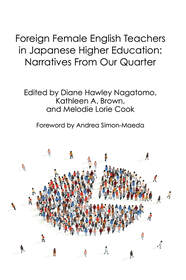 The goal of this book is to provide information, inspiration, and mentorship to teachers (namely foreign women, but not restricted to such) as they navigate the gendered waters of teaching English in Japanese higher education. Such a book is timely because foreign female university teachers are outnumbered by their foreign male colleagues by nearly three to one. This imbalance, however, is likely to change as reforms in hiring policies (which have until recently generally favored male applicants) have been widely implemented to encourage more female teachers and researchers.

The narratives by the contributors to this book offer a kaleidoscope of experiences that transverse several loosely connected and overlapping themes. This book is, in a sense, a “girlfriend’s guide to teaching in a Japanese university” in that it provides much practical information from those who are already in the field. It covers areas such as gaining entry into Japanese higher education teaching, searching for and obtaining tenure, managing a long-term professorial career, and taking on leadership responsibilities. The personal side of teaching is examined, with authors describing how individual interests have shaped their teaching practices. Family matters, such as negotiating maternity leave, reentering the workforce, and difficulties in balancing family and work are discussed by those who have “been there and done that”. The darker issues of the job, such as harassment, racism, and native-speakerism are introduced, and several chapters with practical and legal information about how to combat them are included, as well as a list of valuable resources.

The contributors to this volume have drawn upon their own unique experiences and have situated their stories in areas that are of great personal importance. The individual narratives, when taken together, highlight not only the complexity of the professional identity of EFL teachers but also the myriad of issues that shape the careers of women in Japanese higher education. These issues will resonate with all female EFL faculty, regardless of their geographical location.

Diane Hawley Nagatomo has been living and teaching in Japan since 1979. She's a professor at Ochanomizu University and her research interests include teacher and learner identity and materials development. She has written numerous textbooks and self-study books for the Japanese EFL market. She is also the author of Exploring Japanese University English Teachers' Professional Identity and Identity, Gender and Teaching English in Japan, both published by Multilingual Matters.

Kathleen A. Brown (Ed.D.) is a professor at Kurume University in Fukuoka, Japan. Having extended her “one year in Japan” in 1986 to the present, she has built a career in tertiary education, with a particular interest in language program development and assessment. Although her main research areas are needs analysis and testing, she is also an avid proponent of women’s leadership roles in higher education and examining the construct of gender in research.

Melodie Lorie Cook has been teaching in Japan and Canada since 1992. Her research interests include teacher education, expatriate experiences with high-stakes testing in Japan, expatriate experiences with supplementary education in Japan, and more recently, working with foster and adoptive children in Japanese schools. She is a professor at the University of Niigata Prefecture and the mother of adoptive and foster children. Her list of publications can be found on her academia.edu page.

“This important book showcases some of the understudied and underappreciated challenges that foreign women face as they strive to develop careers in university level English language education in Japan. The first-person narratives carry readers into the heart of stories that have relevance both inside and outside Japan. This approach is not only engaging, but it also reveals common thematic issues as well as great diversity of experiences and identities.”

"The authors of these compellingly readable accounts love teaching in their adopted country, but also struggle with multiple challenges, including various forms of discrimination. This outstanding book blends generously candid stories with thoughtful analysis in the context of current identity research, abundantly demonstrating the power of personal narrative in academic writing.”

"While the chapters all shed light on distinct issues in each author’s personal and professional lives as they enjoyed and struggled with making a home in a country different from their own, the most inspiring thread running through the narratives is the power of connection. The chapters reveal a wide range of beneficial connections that have made the authors’ time in Japan not only bearable but beautiful. These connections ranged from a bond with a single colleague, all the way to the connections that blossom via membership in nationwide teachers’ organizations."