Abstract
In the introduction, the authors explain: "the book was written for people who are learning Japanese in classes and independently, and for teachers of Japanese. It offers practical ideas on how to learn Japanese and what to learn through the experiences of those who have become users of the language. Many of the learning stories in the book are about the rich and enticing ways the various authors have learned and used Japanese at home and in Japan. The authors are diverse in age and background and have learned both in classrooms and while using the language. Some of the stories in the book span the learning histories of the authors. Others focus on an aspect of the language or the personal changes which took place through using it." (p. ix)
​
​About the editors/authors
​
Belinda Kennett began learning Japanese informally as a 17-year-old during a high school exchange year in Mie and then later studied the language and how to teach it at university in Australia and Japan. She has been a teacher in primary and secondary schools in Australia for nine years and taught Japanese at the University of Queensland, Australia, for 25 years. She is interested in long term motivation for learning Japanese, informal and independent learning and language edutainment. She is currently researching the development of listening behaviour in oral narratives in classroom learners and is an Honorary Lecturer in the School of Languages and Cultures at the University of Queensland.

Yuriko Nagata has taught Japanese in Australia and Taiwan for over 40 years and conducted research into the teaching and learning of Japanese as a foreign language. Her Japanese language textbook, Voices from Japan, published by Kuroshio Publishers, Tokyo is used widely by learners of Japanese in English speaking countries and in Taiwan. She is currently an Honorary Senior Research Fellow in the School of Languages and Cultures at the University of Queensland and researches and publishes locally and internationally on the history of Japanese settlement in Australia, including the Japanese internment during WW2. 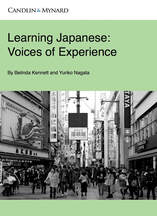 ​Information About the Book