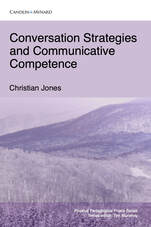 This chapter reports on research in an ESL context (the UK). A mixed-methods study was undertaken, which used a standard experimental design and compared the results of two groups: one receiving explicit instruction in conversation strategies (experimental group) and the language needed to realise them and a control group who received no instruction. Results were measured using a receptive test and a free response spoken test, which gave participants the opportunity to make use of the conversation strategies but did not force them to do so. These were administered at a pre- and post-test stage. In addition, a qualitative measure was used to understand the perceptions of learners about their strategy use in the conversations they were having outside of class. All members of the experimental group kept a simple diary during and after their classes to record conversations they had, the strategies they used and the extent to which they felt the strategies helped.